Join the further adventures and misadventures of Cat Collier, a woman who opens her own private investigation business in her small hometown on her journey from being a small town obituary writer to big city detective. In this fifth installment of the short story mystery series, Cat works to find a missing Chinese girl who came to the United States on a work/study program and disappeared into thin air. An informant takes a big risk. Nola is put in danger. A child’s parentage comes into question. A member of the Palazzo Castellano group is put in danger, and someone comes after another.

PLEASE BE KIND AND WRITE A REVIEW,
THANK YOU!

“Lavender Mist of May”
(A Cat Collier Mystery 5)
by Carol Ann Kauffman
Can be found at:

Amazon – Read with their FREE app

Tori Farrell’s path has been a long one. She was raised by a Motorcycle Gang called the Dragons, trained as an assassin, and lived by the sword in a world consisting of drugs, sex, violence, and murder. She made her escape and even successfully thwarted a second attempt to draw her back in.

Returning to her safe new life, Tori faces unforeseen challenges, as the discovery of her Rock Star relation, Brian Madson, gives way to the desire to have the life she was born to live. Haunted by fear, and caught in a fierce battle between her husband and brother, she must learn to accept her dark past and face her future boldly. The FBI and The Organization still linger in the shadows, and time is creeping forward, pushing her to choose. Which path will she take, and where will it lead, when she is forced to decide between destiny and fate…

Sassy Southern Book Blog Review
By b1ond1e25
Indelible by Samantha Jacobey is the fifth book in The New Life Series. This book picks up where Exposed left off. Tori has been trying to settle into her new life. She now has Michael by her side, and some of the questions from her past have been answered. This now brings a new set of problems for Tori. She now has a brother that is a rockstar, and he has seen her play the guitar and wants her to join the band. But Tori’s fears keep her from seeing how good she really is. Michael just wants things to go back to the way they were. She wants to settle down and have a normal life since she was robbed of one as a child. But just when you think things are going good, she is thrown into yet another set of problems. Can Tori and Michael’s relationship really last when she gets unexpected news that someone from her past is in needs her help? I have loved this whole series so far and can’t wait to see what Samantha has in store for the next book.

You can find“Indelible”
(A New Life Book, 5)
by Samantha Jacobey at:

You can get “Ending In V” for FREE!
Just send Michael Bussa a PM on
Facebook to get the download code.

A dark and humorous, albeit, twisted story of two opposites on their sixth anniversary. They should never have married. Violet is submersed in fantasy and denial. She is blindly in love with Gideon who cannot bear to breathe in the same room with her. She manages her day in the ignorance of bliss, an element of the marriage that only she knows. Gideon is in torment every moment of each passing day. He finally realizes that it must end if he is to be free to search for his own happiness. What will he do?

Another Well Written Masterpiece!!
By Elysa

Another amazing story Michael!! I loved how you captured the love/hate relationship between Gideon and Violet. She thought he loved her when in reality he couldn’t stand her and wished something would happen to her. But all in all, I loved it!! So glad you could share this incredible talent of yours with me! Keep it up!! I’m truly inspired!

“Ending in V”
by Michael Bussa
Can be found at:

Things are really starting to heat up in the Fitz family. Gerry’s cousin and best buddy is left for dead after a beating. When the thugs responsible find out he didn’t die, the game is on to keep Pete safe until he has to testify. After finding a body on a mountain trail in cottage country, Laura helps a local police officer solve the crime while waiting for the birth of her first baby.

DELIGHTFUL MURDER MYSTERY
By M. Moran Bishop
Left for Dead by Karen Vaughan, is witty and intelligently told mystery story. It’s the 6th in the Laura and Gerry mysteries series and a delightfully penned book.

It seems even pregnancy will not stop Laura Fitz from being a corpse magnet, as she stumbles yet again onto another dead body. While Laura is talking to the police, she receives a phone call from hubby. Apparently, Laura’s gift or curse for discovering the dead and becoming embroiled in the nasty affairs of the murder has rubbed off on to Gerry, for he has found his cousin near death.

The Fitz’s have once again become entangled in murder, mayhem, the lives of others along with the danger it entails. But, through it, all Laura remains her witty self. Gerry doesn’t fare as well as his love for Laura, and their coming baby upset his judgment at times. After all, it is difficult to be objective when the life of one’s wife is on the line.

Ms. Vaughan has another terrific read in Left for Dead. I enjoyed this book enormously and highly recommend it to everyone.

Click here to watch the book trailer
for Left For Dead

You can find
“Left for Dead”
(Laura & Gerry Mystery #6)
by Karen Vaughan at:

All Carson Reno Mystery Series Books are standalone novels. It is not necessary to read them in any particular order.
The racial problems of 1962 have found their way to the small West Tennessee town of Humboldt. A white woman has been brutally murdered, and one of Carson’s childhood friends has been accused of the crime. Carson’s friend is a colored man who once worked for his grandfather, but the accusations and problems extend beyond the crime and to the heart of this small community.
Carson finds a divided town; a town divided along the lines of race and the interference of outside groups, which makes this division even wider.
Challenged with defending his friend, Carson must find a solution before the two sides collide, which would definitely have devastating results.
Join Carson, as he faces one of his toughest challenges in ‘the Crossing.’

“Just finished. Love, love, love it! I giggle every time a new “character” that I recognize appears. You are so entertaining. Can’t wait for more to come. Thanks, Gerald, I love your stories.”

“the Crossing”
(Carson Reno Mystery Series,
Book 5)
by Gerald W. Darnell
Can be found at:

Click here to vote for the cover for “Shadows and Lies”

By Elna Blankenship
INTRIGUING read…couldn’t put it down!!! Even if you’ve never read a Carson Reno mystery, you will immediately get wrapped up in this terrific tale. As in all Carson stories, the characters are colorful and true to life all engulfed in twists and turns – some digging for the truth and others hiding in Shadows and Lies! In addition to the brilliantly written “whodunit” mystery with historical references and period pics, the author’s clever hints, innuendos and plays on words further enhance reading pleasure. For me, references to actual places and events in West TN invoke fond memories, especially the Peabody Hotel Lounge where my parents spent time with their friends before I was born. So, Carson Reno, “keep ’em coming”!!!

Her dreams shattered, Connie Meyer just wants to be left alone to live her life in peace. She finds that difficult to do when her estranged husband’s mother insists she returns to her son and a marriage she no longer wants—a marriage that does more harm than good.

Desperate to escape, Connie returns to Vail Mountain, the one place she had truly felt alive. However, her troubles soon follow her, and she gets more than she bargained for as she fights not only her past but the intense feelings that one newly elected sheriff arouses in her.

Jacob Tanner is weary of the city life and the never-ending stream of criminals that plague New York City. He resigns from the police force after a drug bust goes wrong, landing himself in the hospital to face his mortality alone. Uncertain about the direction of his life, he learns of the new sheriff position on Vail Mountain and takes a gigantic leap of faith—faith that he isn’t making a big mistake. Armed with nothing but a few possessions, Jacob relocates, only to find himself falling hard for a woman whose blue eyes speak of pain and loneliness.

As he battles his worst nightmare, can Jacob show her there is more to life than what they have been dealt and convince her that with him, nothing is impossible?

Can be pre-ordered at:

After Graduating from the Crime scene investigator course, Laura and Gerry escape for some quality time in Jamaica. As usual, things are not going according to Hoyle for Cookie the corpse magnet as another murder takes place. The victim was obnoxious and not widely admired by his fellow vacationers but what did Donovan Mitchell do to deserve death?

ON SALE IN APRIL FOR 99 CENTS! 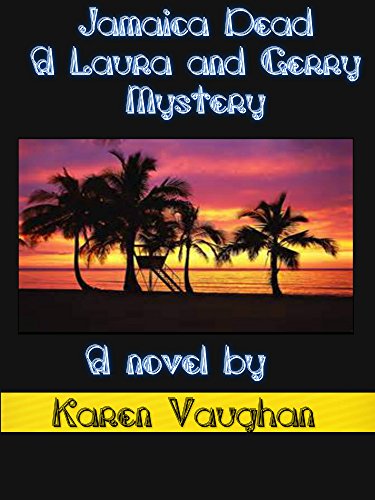 Love the sarcastic one-liners, sometimes on the bawdy side, delivered with good comedic timing

Karen Vaughan writes from up North—way up north. You know, over the border in Canada, eh? I have kinfolk there, too, so maybe it’s family ties that make the characters and stories special. Not that she situates all her mysteries there. In book 3, Daytona Dead, Laura, and Gerry Fitz cross the border into the U.S. As preposterous as it may seem, they find themselves in the middle of a monumental mess from the moment they arrive for a honeymoon in Daytona Beach, FL. What else would you expect when you pull into the resort parking lot and run over a dead body? And, oh yeah, the dead guy you ran over just happens to be your ex-husband. In a situation like that, you can just thank your lucky stars if you get back to Canada alive and without creating an international incident. In Jamaica Dead, that international incident thing is back on the table. Another vacation, another murder for “corpse magnet,” Laura Fitz! When an obnoxious fellow traveler turns up dead, was it something he said, or is there something more sinister going on? Maybe even a bit of hoodoo or voodoo? You’ll have to read it to find out!

What I like best: Sarcastic one-liners, sometimes on the bawdy side, and delivered in a comedic style. Why not? Karen Vaughan has some stand-up experience on her resume!

AVAILABLE AT AMAZON AND FREE WITH KINDLE UNLIMITED!

Things are really starting to heat up in the Fitz family. Gerry’s cousin and best buddy is left for dead after a beating. When the thugs responsible find out he didn’t die, the game is on to keep Pete safe until he has to testify. After finding a body on a mountain trail in cottage country Laura helps a local police officer solve the crime while waiting for the birth of her first baby.