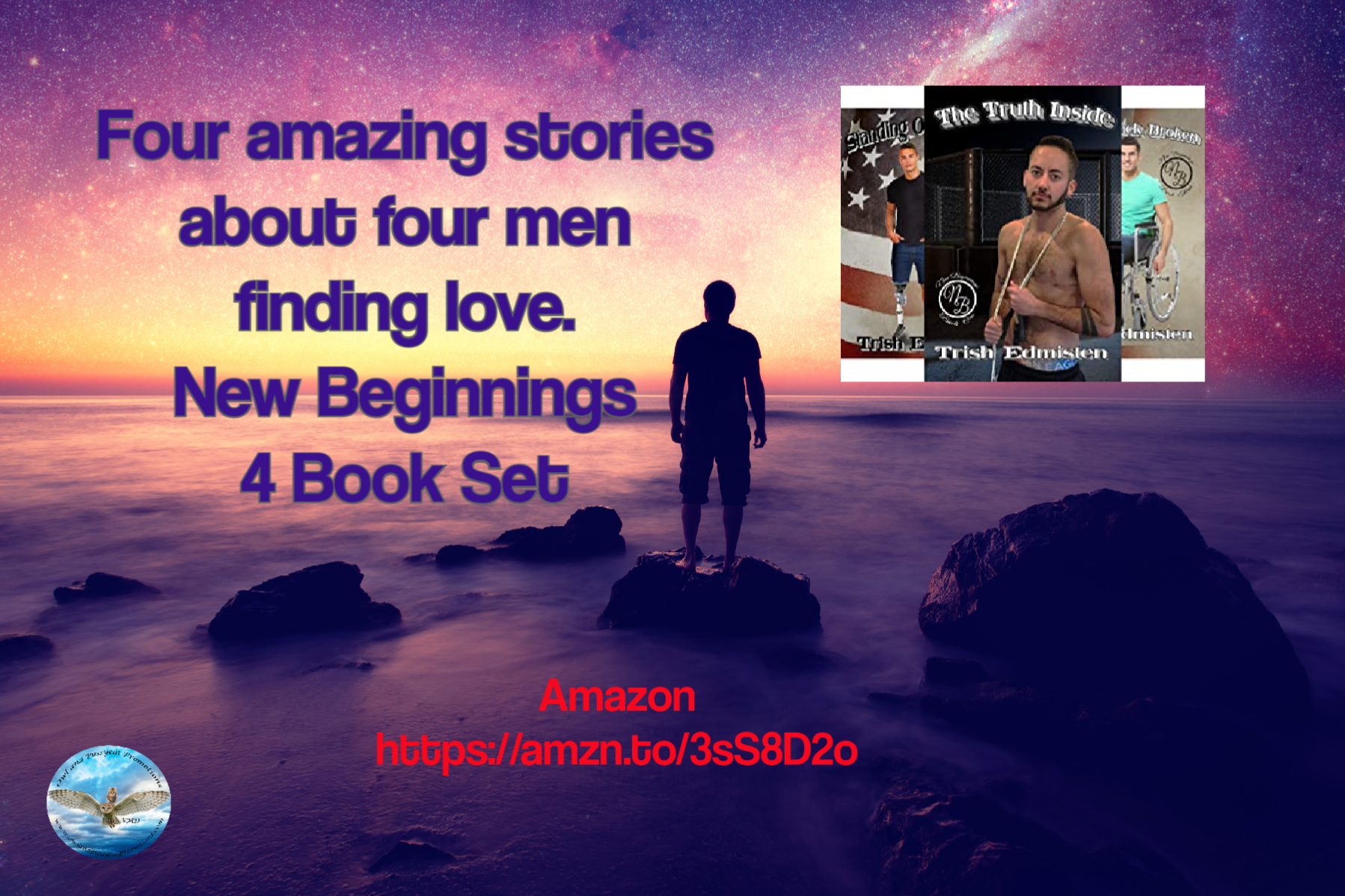 From Book 1: For as long as he can remember, Nate’s dreamed of being an MMA fighter. Nothing is going to stand in his way and no one is going to distract him. Everything is going according to plan when Natalie comes along. Even though he wasn’t looking for love, Nate can’t help falling fast and hard. Smart, sweet and supportive, she seems too good to be true, but it’s actually the other way around. Nate isn’t good enough for her, and he’s keeping a secret that will change everything between them. One day, she’ll see the truth inside of him. Until then, Nate’s determined to keep Natalie in his life for as long as he can.

I loved The Truth Inside. It was my first trans book I’ve ever read but Trish handled these mature themes very well. I loved Nate and Natalie together and seeing Natalie accepting of Nate made me so happy. I love Joss and Stone together too. Every book Trish writes is fantastic and I’d even read her grocery lists!

From Book 2: When his best friend decided to join the Army after high school graduation, there was no question Joel would join too. Best friends since kindergarten, the two of them did everything together, and this was no different. A routine mission changed their lives forever. Slade ended up paralyzed while Joel lost his leg. Joel never expected to live with one leg, but he wasn’t going to let it break him. Like he did with everything else, he adapted, and he accepted that he was never going to find love. Women might want to sleep with a war hero, but they sure as hell don’t want to live with and take care of one. That theory proves true until Courtney comes along. Beautiful, independent Courtney with her wicked sense of humor is the perfect woman for Joel. All he has to do is trust her enough to accept that he doesn’t have to stand on his own anymore.

In this second book of the New Beginnings, all the characters from the first book are back and we get to see more of Joel and his best friend Slade. Both of them have suffered both physically and emotionally after their time in the army and they are trying their best to cope. This story centers around Joel and the girl he meets, Courtney. Their first couple of encounters don’t go well, but still, there is something between them and Joel is determined to pursue a relationship with Courtney. This book delves into PTSD (which both Joel and Slade suffer from) and the difficulties living with it.

From Book 3: At the age of eighteen, Slade couldn’t wait to join the Army and get away from the boredom of small town living. Two years later, his life is irrevocably changed when an IED blast leaves him paralyzed from the waist down. Though he’s back in the one place he was determined to get away from, things could be worse. At least he’s got a good group of friends to help him out, and that will have to be enough. No woman wants to be stuck with a broken man. Then Mac comes crashing into his life, stirring up feelings that Slade never thought he would feel again. As much as he wants her, Slade can’t believe she feels the same. Will his insecurities keep them apart, or will Mac be able to convince Slade she loves him the way he is?

Author’s Note: Although this book is part of a series, it can be read as a standalone. This is a 68K word novel with a guaranteed HEA.

This book tells the story of Slade and Mac (yes Mac is a girl). After being paralyzed in an accident Slade has given up ever finding love. Until he meets Mac. The story shows the reality of the life of a paralyzed man.. Please read the first two books in the series and you will enjoy this story more as you will meet the family and friends. This series has taken over too spit of my all-time favorite reads!

From Book 4: Being born blind, Ken has always lived a sheltered life, thanks to his overprotective mother and older sisters. If it wasn’t for his best friend, Stone, he’d never have any kind of freedom, let alone a life. Twenty-one years old and still living at home, Ken is ready to be independent. When he moves into his own apartment and meets his new neighbor, Cassandra, he knows he’s made the right decision. Ken wants Cassandra, and the feeling seems to be mutual, but he’s worried. Can she accept that he can be everything she needs, or will she let his blindness keep her from taking a chance?

Although this book is a standalone, it is more enjoyable if you read the first 3 books in the New Beginnings series. The hero, Ken, was introduced in the first New Beginnings book, while the heroine, Cassandra, is a new character. Ken is blind and the author does a good job of showing the challenges a blind person may face, without invoking any feelings of pity. Both characters are likable and their relationship unfolds naturally.