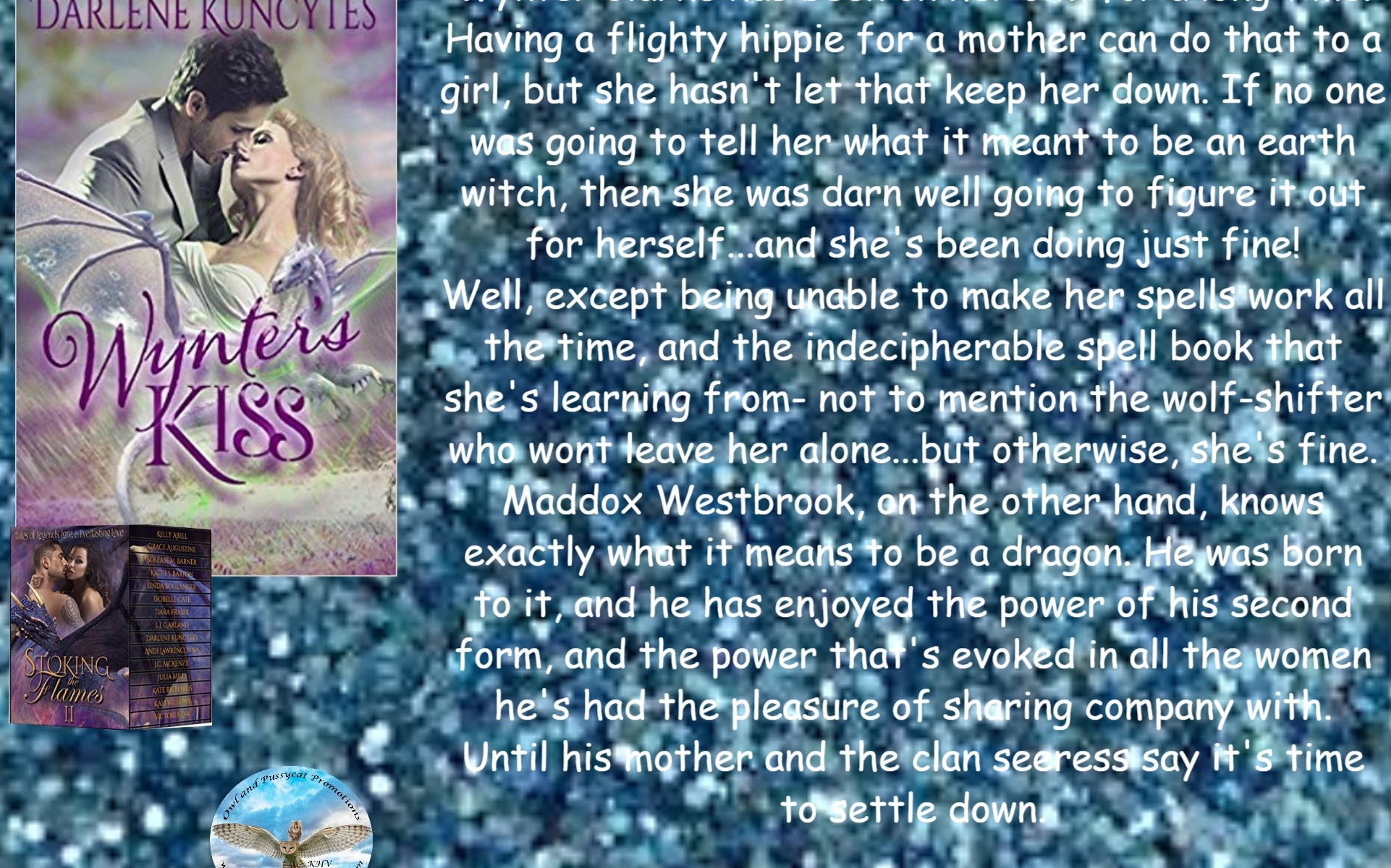 Wynter Clarke has been on her own for most of her life; having a hippie for a mother can do that to a girl, but she hasn’t let that keep her down. If no one was going to tell her what it meant to be an earth witch, then she was darn well going to figure it out for herself, and so far she’s been doing just fine!
Except for being unable to make her spells work all the time, not to mention the indecipherable spell book that she’s learning from, and the wolf-shifter who wont leave her alone…but otherwise, she’s fine.

Maddox Westbrook, on the other hand, knows exactly what it means to be a dragon. He was born to it, and he has enjoyed the power of his second form, and the power that’s evoked in all the women he’s had the pleasure of sharing company with. Until his mother and the clan seeress say it’s time to settle down. The only thing to do then is to escape to his cabin and hope their prophecy doesn’t come true.

When Wynter decides to go for a hike in the woods, she never expects to fall head-over-heels, literally, for the dragon who comes to rescue her from her near death experience. Only problem is, she can’t quite remember who she is, or why she was in the woods in the first place. But helping her to figure it all out seems like the right thing to do for Mads, and the little witch’s otherworldly beauty doesn’t hurt either.

But there’s a wolf-moon on the rise, and if Wynter can’t remember who she is in time, it just might mean the end of the silver dragon flying high.

Can Maddox help his earth witch find her true power in the face of her deadly admirer, or will they part after sharing Wynter’s Kiss?

From best-selling author Darlene Kuncytes comes a fast-paced, quick-witted paranormal romance that will have you falling in love!
Soar with the dragons and lose your heart!

A romantic paranormal story with a very HEAReviewed in the United States on July 23, 2018Verified PurchaseWynter’s Kiss is like a magical carpet ride you don’t want to end! I totally loved it and the cover and can I have more!
Maddox Westbrook is a dragon and who doesn’t love a dragon?! He decides to get away to his cabin and ends up rescuing a beautiful woman from a river. He takes her back to his cabin hoping it’s not to late.
Wynter is a earth witch and having a little trouble making some of her spells work until she has the right motivation. She is sexy, sassy and sweet. And wakes up not remembering who she is.
This is a quick, romantic, fast paced story that you will not want to put down.
The more of Darlene Kuncytes I read the more I fall in love with her writing .