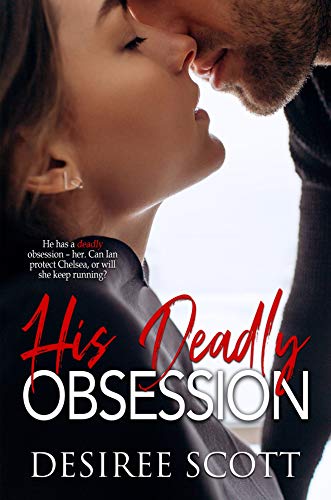 He has a deadly obsession – her.

Chelsea Hopkins thought she had killed the man who abused her. When her desperate mark misses its aim, fear keeps her running. She has spent years one step ahead of him, a man hell bent on destroying her. Running has taught her that trust was a fragile illusion that she couldn’t afford, or it could kill her.

When she hits Sweet Valley, Georgia, Chelsea had no intention on staying long. Armed with scars and nightmares, she soon forges a new life and a new identity beneath layers of deceit and deception but her time is running out.

Ian St. Clair can see the pain in Chelsea’s eyes, the shattered turmoil in their dark depths. He craves nothing more than to keep her safe. He knows she wants to escape her past and he will stop at nothing to show that she belongs in the small community, with him.

Can Ian protect Chelsea, or will she keep running?

Will he find her?

Wow! So I received this book as ARC for an honest review. I never heard of Desiree Scott, but after reading [this book] I am a fan. This book drew me in from the very first page. The story is about a Girl who is running from her past. She does not let anyone come close, cause when he does they end up missing or dead. She meets the St. CLAIR brothers and they are vowing never to let anyone hurt her. I read this book in 1 day. Could not put it down needed to know what happens next.

One Reply to ““The story is about a Girl who is running from her past.” – His Deadly Obsession by Desiree Scott”