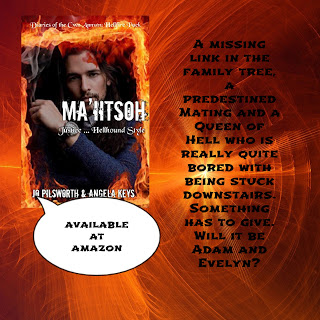 Adam Anghelescu is the lawyer of the Anghelescu Pack, tasked with ensuring that a Hellhound Pack stays under the radar of the authorities. If matters becomes sticky, his Alpha has ensured he has the training and the contacts to … unstick the issue at hand. When Fane asks Adam to carry out a straightforward burglary to secure key information in the ongoing skirmish to keep Lamashtu Anzillu contained, Adam agrees it shouldn’t pose a problem. But, he didn’t expect to meet Evelyn. He didn’t expect to find someone attempting the same burglary as him. He didn’t expect to find that his target’s niece was his predestined Mate.

Evelyn’s instincts as an investigative reporter told her that something was going down at the home of her Tante, and it wasn’t just the death of Oncle Henri either. But her attempts to discover more are interrupted by a … something, who transported her to the roof of the exclusive Paris mansion. Of all the damn cheek!A missing link in the family tree, a predestined Mating and a Queen of Hell who is really quite bored with being stuck downstairs. Something has to give. Will it be Adam and Evelyn?

Joshua Griffith
5.0 out of 5 stars An intriguing story

Verified Purchase
I thoroughly enjoyed this one! The story revolves around Evelyn as she’s trying to be there for her aunt and cousin as they try to show a strong front in the eyes of the family company when the CEO abruptly dies. Adam, the Hellhound lawyer of his pack is sent in to take measure of the successor, since his pack has a 30% share in the company. The pack is also trying to track down nefarious monetary dealings on of companies, but unbeknownst to them, the demon Queen that had possession of Adam’s pack is working on a plan to bring them back into her grasp. As Adam discovers Evelyn as his Mate, more of the evil queen machinations begin to unfurl. Can Adam trust Evelyn to accept his true nature of is she a pawn for the demon Queen? Does Evelyn have the strength to endure to difficult road ahead of will she succumb to the demon Queen’s ultimate goal? Check it out and see for yourself. I highly recommend this one!