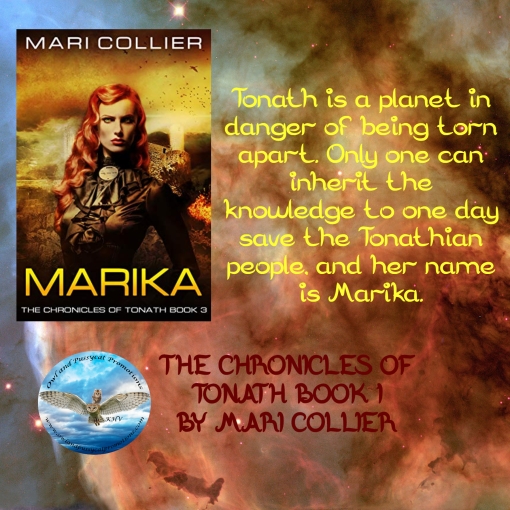 With a spaceship and the knowledge of three ancient civilizations, will she have time to access it all.. or will the Star Shifts hide the information, and drive her into the arms of her childhood love?

By the time I began to read Marika, I found I stepped into the middle of a series. But this was no problem as I soon realized this is a stand-alone story. It was easy enough to discern what led up to Marika’s story by paying attention to the subtle clues of past history written in.

As Marika grows into womanhood, she soon learns that she is the only person who may be able to save the people of Tonath. She is hindered by The Teacher and The Way teachings that all must live by, and that say women have no place in this man’s world. Yet, Marika has inherited knowledge and capabilities from her father that only she can know. She has also inherited a way to extend her life so she can accomplish or finish what her father was to do. Despite oppression, she is determined to put this knowledge to use to save the people and the planet, even as the tumultuous planet experiences Star Shifts, ground upheavals, storms and lightning that cause all-consuming fires, and the deaths of whole communities, and even the possibility of the planet being drawn into a black hole. Marika’s life is the focus of this story along with her constantly having to prove her capabilities.

Toward the end of the saga, time speeds up so that we get to experience and know all the Marika was able to accomplish, how it changed people over time, and it is much. Part of what she was able to accomplish was the building of ships to carry some Tonathians to distant planets. It’s an effort to save some of the people should the Star Shifts wreak havoc yet again and kill everyone else.

The end of the story, when Marika is sitting at her husband’s grave site, slowed the story down finally. When I finished and closed my Kindle, I ended up opening it again just to re-read the ending. After experiencing Marika’s long and dedicated life, the ending with her sitting at the grave site left me melancholy and emotionally involved with her outcome, the end of a full life. Or is it really the end?