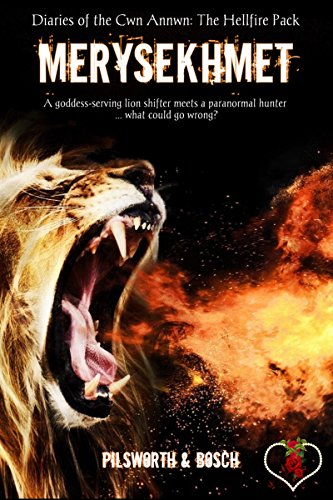 Ramses Tariq-Omari has walked the world of man for millennia, a lion shifter, a healer and a soldier, he protects those who know nothing of the paranormal world, of the creatures that seek to harm them. Having served the Goddess Sekhmet since the age of ten, it has been lonely existence indeed, but one he has never regretted having chosen.

Elizabeth DeAnglo needed ‘time out’ from hunting paranormal creatures. Taking a job as a PA to a Wall Street seemed like a plan, until she discovered that her new boss was also the wolf-shifter Alpha of the Hellfire Pack. Since the loss of her fiancé and child to a Wendigo attack, she has trained as a paranormal hunter, driven to hunt down the creature responsible. Only then is she certain that she will find peace. Despite living and working with the Hellfire Pack, despite having a family in her fellow paranormal hunters, she is alone, always on the periphery. When she is attacked, again, by unknown Hellhounds, Elizabeth wonders why she is being targeted. She also wonders at the identity of the mystery archer who comes to her aid.

A millennia-old paranormal warrior and a modern day paranormal hunter. Two sides in opposition, yet fighting the same enemy. The attack will change Elizabeth’s life and force her to face some harsh truths. Can she straddle the worlds of the paranormal and those who hunt them? What will happen if she is forced to choose? Can love overcome the deep-seated prejudice which Ramses will face from Elizabeth’s friends?

Merysekhmet is the first paranormal romance novel written by Jo Pilsworth and Kaitlyn Bosch, two friends who met via Facebook role-play. Based on the legend of the Egyptian Goddess Sekhmet, it forms part of the Diaries of the Cwn Annwn: Hellfire Pack series. Content is aimed at an 18+ audience and contains scenes of mild violence. Some sexual content.

Reviewed in the United States on November 1, 2018

I’ve read several parts in this series now and have loved them all. There is a really fascinating backstory to these shifters that makes them stand out and each part deepens the mythos. In this one there is a Merysekhmet as the lead hero, Ramses. What he is, is truly unique, and I’ll not spoil any details about that. The chemistry between him and Elizabeth was wonderfully done. Another thing I enjoy is that the romances in these are very natural and unfold alongside of a story. It was also neat to see a few characters I knew from later parts. I read them out of order, but that’s okay because they can all be read alone as each is a complete story. If you are looking for paranormal romance that has more to bite into, you can’t go wrong with any of the books in this series.