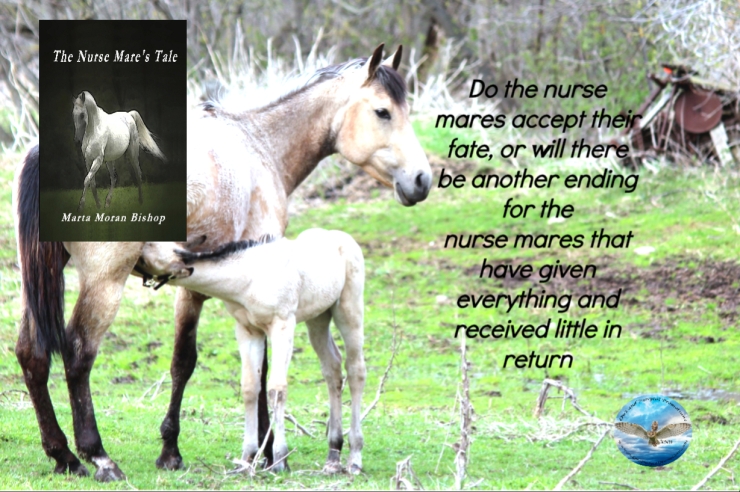 The Nurse Mare’s Tale is in a way the prequel to Dinky:
The Nurse Mare’s Foal, as it tells the story of Dinky’s mother.
This lovely story is told from the viewpoint of two aging nurse
mares about to give birth, and the trials they go through. It tells
us of Sadie and her friend Nellie and is accompanied by
charming dialogue (both speaking and thinking). The plight of
these animals is described in empathetic detail.
After enduring years of breeding and loss, the older nurse mares
must face the auction with the promise of being slaughtered, as
they have become too old for breeding and thus unable to be
rented out as nurse mares to feed the foals of the high-dollar
mares.
Do they accept their fate, or will there be another ending for the
nurse mares that have given everything and received little in
return?

Sherrill S. Cannon
Nurse-Mares-Tale of Dinky’s Mom
This story about the past and present treatment of horses will appeal to all animal lovers and especially to horse aficionados. The tale is told from the point of view of an aging mare, whose main function appears to be breeding foals and then feeding them milk until they are big enough to take them away – or to use her milk to feed other, more marketable, foals. From the viewpoint of two horses, Sadie and her friend Nellie, with accompanying charming dialogue (both speaking and thinking), the plight of these animals is described in empathetic detail. This lovely story portrays two aging mares about to give birth, and the trials they go through to give birth and protect their newborn babies. The reader is drawn into the story, culminating in the wonderful escape coup the mares plan, and are able to carry out, to gain their freedom and find a new life.
The symbolism of the conclusion, where Sadie is renamed Angel and given responsibility for becoming a nurse mare for her new owner’s motherless foal, brings the circle around as the new owner proclaims, “We all need jobs. It makes us feel important.” (The story is also somewhat of a subtle allegory of today’s world, where many females are considered no more than breeders and have to live in a male-dominated world. Although in this world, at least the fillies are considered worthy, unfortunately mainly for their ability to provide milk to newborns. On the other hand, in this world of selective breeding, newborn colts are often considered “junk foals” and left to die. So the story also questions the reasoning behind why some horses are considered to be more valuable than others.)
Those of you who have previously read and enjoyed the author’s “Dinky, The Nurse Mare’s Foal”, will love and appreciate this prequel.

One Reply to ““The tale is told from the point of view of an aging mare, whose main function appears to be breeding foals” – The Nurse Mare’s Tale by Marta Moran Bishop”