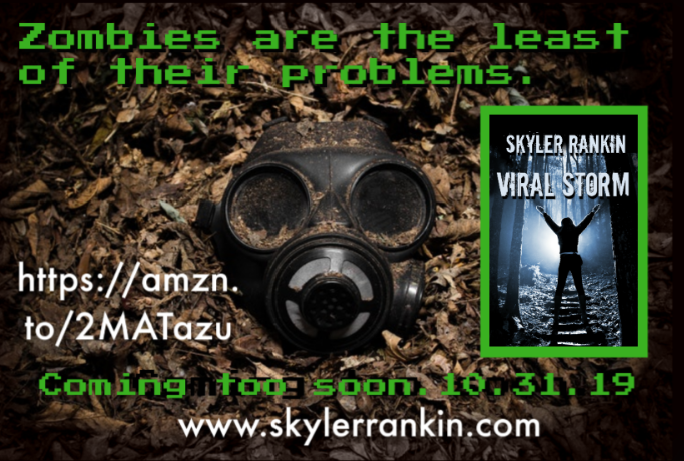 “The sores forming with unholy speed on Harley’s arms and legs confirmed the infection was spreading. Its poison surged through her veins with such momentum that she could feel its sting in the current of her pulse. Unrelenting pain seared every cell, and she struggled to maintain focus, despite the fever raging in her blood.” – Viral Storm
Viral Storm continues the story of Casey Williams and her friends attempting to flee the country and expose the evil work of BioGenetics, creators of the virus that spawned the zombie apocalypse. Euthanizing her best friend, who’d been infected with the virus, was the most soul-crushing thing Casey could have imagined, but that was nothing compared to what happens next… Like the first book in the series, Viral Dawn, Viral Storm has gore, violence, and dark themes common in zombie apocalyptic fiction, but the book focuses more on the characters’ lives than other elements. The story centers on strong, young adult female characters as do similar books in female-centered dystopian fiction like The Hunger Games, Twilight, Divergent, and The Year of the Flood. Join Casey as her struggle for survival continues in Viral Storm.

The much-anticipated sequel to Viral Dawn is here! And it was sooo worth the wait! This is such an amazing series. I could see it being a tv series or movies, they are so well written. The characters are so well written that you get so invested in them and their stories.
I could not put this book down. I read it straight through in one sitting, it sucks you in and you have to know what’s going to happen next. Casey is such a strong character. She’s been put through the wringer but still manages to rise up and keep pushing through. I love that in this one you also get other characters POV.
I would recommend this series to anyone who loves a good zombie book. It’s labeled as YA but honestly, adults would love it too. Book 3 can not come soon enough!