Join Cat Collier from January Black Ice as she starts her own detective agency, Red Cat Investigations, inside the gorgeous old Palazzo Castellano Hotel and solves her first real paid case, the case of Shotzie, the missing French poodle. Just when she feels she is destined to find lost pets and missing luggage for the rest of her life in her beautiful new office, complete with business cards, magazines in the waiting room, and her Red Cat logo painted on the frosted glass door, a lovely, mysterious woman named Ms. White hires her to find out who is stalking her. A dead rat on her car. Being run off the road. A car bombing. Someone wants her frightened or maybe…dead.
The trail of graft and corruption leads Cat into danger as she hides the mystery woman with the old, reclusive lawyer Detrick Bittmor for safe keeping.
Cat’s relationship with the handsome Erick “Carter” Larsen is put in jeopardy when she teams up with Officer Kiernan Scott from the Heaton Valley Police Department to unravel the mystery in February White Lies.

The second in a very good series.

Having thoroughly enjoyed ‘January Black Ice’, the first in Kauffman’s Cat Collier mystery series last year, I started this second installment feeling a little sorry that I had left it so long.
‘February White Lies’ picks up the story of Cat and her boyfriend Carter a short while after the end of the first story. Members of their families and friends return as regular characters, alongside new people of interest in a new mystery.

Kauffman’s characters are natural and familiarly drawn, and her writing is comfortable and easy to read. The different characters’ stories are interwoven neatly enough to work in a novella, but without the events of the plot feeling contrived or relationships overly orchestrated.

I thoroughly enjoyed this book, so I’m going to commit to reading ‘March Blues’ in the coming month. 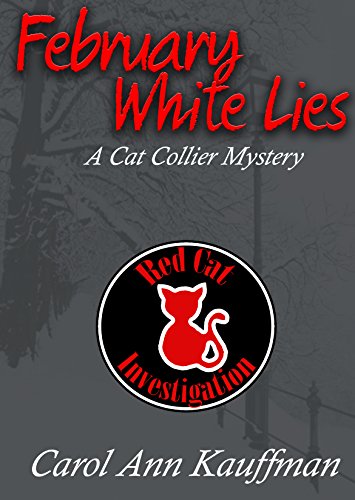