Nigel Holmes is a British Police Officer sent to Toronto after a witness was brutally murdered on his watch. Kristen Sherlock is a Detective who was framed for drug possession and is being harassed by a dirty cop bent on ruining her. Nigel is politically incorrect and swears like a trucker. Kristen is a by-the-book Police Officer. Can they work together without driving each other nuts before her stalker hurts Kristen? Nigel, Kristen and her former partner, Craig, work to bring the stalker down.

“Can the Andrew Dice Clay of British detectives get in touch with his inner nice guy when banished to Toronto? One can only hope the renowned politeness of his new Canadian colleagues rubs off on him and quick once this defective detective opens his mouth to speak. The stream of inappropriate epithets is jarring, to say the least. It’s no wonder he was exiled to [North] America by his Manchester superiors. Nigel Holmes’ is loathsome and, oh yes, he also let a serial killer escape after the man killed the woman he loved. Dereliction of duty left him damaged personally and professionally. Needless to say, his new compatriots are not that thrilled to meet Nigel. He and his new partner, Kristen Sherlock [yes, Sherlock & Holmes] don’t hit it off, but she deploys her niceness to correct and control the out of control Brit. Kristen’s got trouble of her own, though. Not all Canadian police officers are nice, and there’s an especially nasty one who has it in for Kristen. Why? Well, that’s part of what this ‘whydunit’ is about. Can Sherlock avoid becoming a victim of her vicious colleague’s wrath? Can Holmes shed his barbarous ways so that he’s a suitable colleague and partner for anyone, anywhere? You’ll have to read Holmes in America to find out–tongue planted firmly in cheek.”

Karen Vaughan lives in Peterborough, Ontario with her husband Jim and a cat named JJ who has plenty of catitude! Karen started her literary journey in 2005 when she was home on sick leave and was tired of staring at the four walls or twiddling her thumbs. An idea for what would become DEAD ON ARRIVAL popped into her head and the feisty 30 something character Laura wouldn’t leave her alone till her story was written. Laura took a break from pestering the poor author so she could write a free-standing novel DEAD COMIC STANDING. Soon Laura was on the campaign to get Karen back to what would become the Laura and Gerry series. It now has 7 books, the latest being DEAD TO WRITES. Karen is the proud mom of one, step-mom of 4 grown kids, and 2 grandchildren. While not writing her fingers to the bone she hosts WRITERS ROUNDTABLE, an online radio show the second Tuesday of each month. She is also a partner with Viv Drewa in OWL & PUSSYCAT PROMOTIONS. promoting independent authors. Karen is also a stand-up comedian who does her routine for local talent nights. She also loves reading, crafts, and drawing.
BOOKS BY KAREN VAUGHAN
LAURA AND GERRY SERIES
DEAD ON ARRIVAL
OVER HER DEAD BODY
DAYTONA DEAD
DEAD MEN DON’T SWING
JAMAICA DEAD
LEFT FOR DEAD
DEAD TO WRITES
DEAD COMIC STANDING
HOLMES IN AMERICA
JEFF GIBBONS EXPERIENCE
PLAYING DEAD 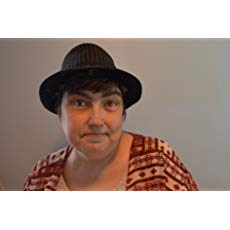 2 Replies to “Holmes in America by Karen Vaughan. A murder mystery that is sure to please.”