Viv Drewa’s short story From the Pages of Grandfather’s Life is a dramatic turn from her novels. She writes of her grandfather Lucjen Czepirski’s escape from Russian occupied Poland in Nineteen-Thirteen. It is a true story of heroism, endurance, and the pursuit of happiness. 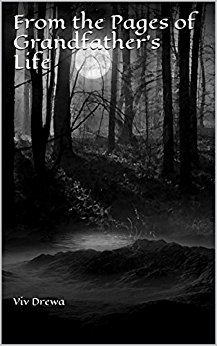 “Grandfather fought for his freedom, not unlike the slaves who fought for their in the south around the time of the civil war. Grandfather escaped from a communist regime in Russia and Poland to make a better life for himself and his family. The things this man had to endure during his escape from what sounds like a living hell makes me realize the pursuit of happiness of the human race. A place to live in peace, freedom, liberty, and justice. The author of this book is his granddaughter a lovely person who carries on her grandfathers legacy in a beautiful and endearing way. Read this short excerpt of Grandfather’s life. It is humbling, to say the least. A feel-good read.”

“In 1913, Lucjan Czepirski was a man trapped in Russian occupied Poland. This short story concentrates on his escape and is suspenseful until the very end. Viv Drewa paints a story about a desperate man determined to have a better life. Five Stars.”